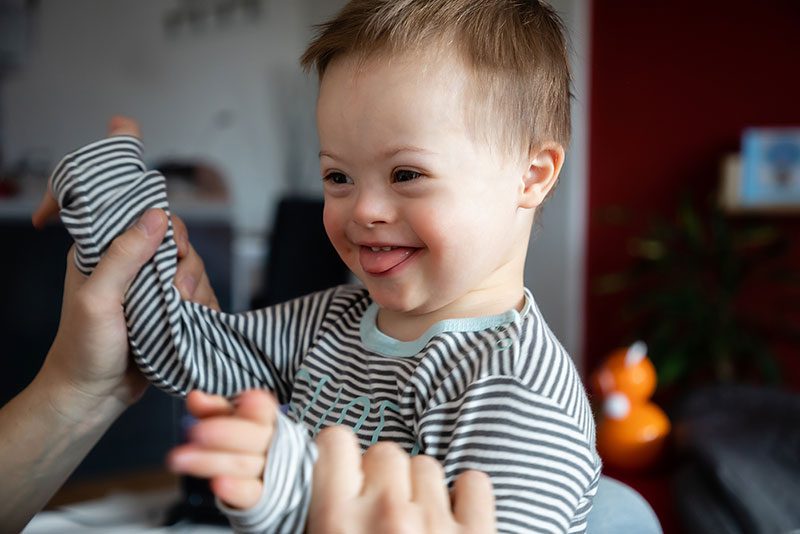 Associate Professor Jerry Wu has received a two-year, $429,000 grant from the National Institutes of Health (NIH) to study motor, cognitive and language development in infants with Down syndrome (DS), a genetic condition that causes physical and cognitive developmental delays.

This funding will allow him to study how infants with Down syndrome learn two specific motor skills, walking and grasping, and whether those skills sets will lead to greater word development and physical gesturing.

Researchers have found that motor skill development for typically developing infants is closely connected to their cognitive and language skill development, but this same connection hasn’t been closely studied in infants with Down syndrome.

Wu has conducted research with children with Down syndrome for more than a decade, and his work has shown how a treadmill-based intervention program can improve their walking development. His NIH grant will both incorporate and build on this previous research with a focus on possible motor skill and cognitive development connections.

Families with infants participating in this project will be divided into one of three groups. The first group will use an at-home version of Wu’s treadmill intervention to help children with their walking skills; the second will receive the same treadmill intervention and given customized Velcro mittens and children’s toys with Velcro strips on them to teach them how to grasp objects; and the third group will be the control. He will measure the infants’ gestures and their word production at specific times to see if the walking and grasping interventions made an impact.

“Down syndrome is the most common genetic condition that causes intellectual disability and health challenges. It occurs in 1 out of 700 new births in the United States,” Wu said. “This new project aims to understand the impact of motor intervention on cognitive and language development in infants with Down syndrome, and improve their quality of life.”