Martin Luther King, Jr. said it best: “The ultimate measure of a man is not where he stands in the moment of comfort and convenience, but where he stands at times of challenge and controversy.”
While this quote was made during a time of racial injustice and unrest, it can apply to any situation in life. Olania Coman-Washington can certainly attest to that. In Fall 2015, Olania started college with the excitement any freshman has when starting a new chapter in life. She had her goals, dreams and a plan to reach them just like any other student. A lupus diagnosis at age 16 was not going to limit her path or dampen her spirit. 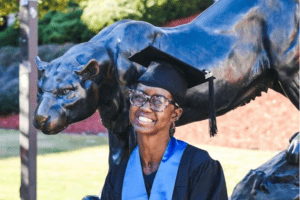 Life with lupus has been interesting because many people did not know I had it. I tried to keep my life as normal as possible. I continued participating in band and hanging out with friends while trying to basically ignore the fact that my pace is not like everyone else’s,” she said. “Once I got to college, pretty much everything changed. Lupus is a part of my life that I’ve had to learn how to manage in a positive way. That’s when I learned to breathe and take a step back.”

As she progressed through the exercise science program, she enjoyed college life but unlike most students, she had to battle the disease’s effects. Exercise science is an active major with many physically-demanding classes, and Olania was determined not to use her disease as an excuse to get out of any activities. “For starters, I was always exhausted. Even if I was not experiencing a flare-up, I was still tired. When I was having a flare-up (usually around finals), it was very challenging to get my work done,” she said. “I was struggling between doing quality work for my classes, being an active member of my sorority and taking care of myself. I really was determined to finish school no matter what.”

As her kidneys started to fail, her doctors told her to keep an eye on her blood pressure. If it reached a certain point, she needed to go to the emergency room immediately. Sadly, that day came on Feb. 12, 2020.

It was four hours before her blood pressure was treated, despite her urging the doctors to bring it down. Unfortunately, she began to show seizure symptoms and she had a brain bleed/stroke. At about 3 a.m., they had to rush her into emergency surgery and removed part of her skull to work on the bleed. In her early 20s, Olania suffered a major stroke.

The next several months were a whirlwind. She had surgery the very next morning but shortly after the first one, they saw that she began another bleed, so they took her back to surgery. Later that morning, she was taken to the ICU, not awake and highly medicated. She was in a coma for a couple of weeks. The first few days in the ICU, the medical team revealed they did not have any confidence she would survive. While the hospital staff recommended sending in a priest to give her last rites, her family never gave up hope.

She was totally paralyzed from the neck down at first. Left side mobility came in slowly after she came out of the coma. Even after she opened her eyes, the doctors said she was still in a coma. All her family could do was wait and pray.

As time passed in the ICU, the medical team offered only low expectations. The family was told she would probably never speak, and family would have to communicate with her as if she was a child. Her cognitive impairments were expected to be so severe that she may not understand language or be able to think for herself due to the location of the brain bleeds. The family was also told that she would never walk and would always have minimal mobility.

The family did not give up and neither did Olania. While she was on a ventilator and unable to speak, she miraculously was able to follow and track people in the room with her eyes. Olania was in there, her family knew.

In April, about six weeks from that fateful day, Olania was eventually moved out of the ICU. This was about the time the COVID-19pandemic had begun and her bed was needed for those patients. While the pandemic grew, her family stayed by her side, practically living at the hospital; however, visitors were unable to come. Her family, her inner strength, prayers, determination and sheer guts helped her gain enough strength to move to a regular floor. The ventilator was removed and a tracheotomy was put in. She then began to eat solid foods again and feed herself, which was a major step. However, she was still paralyzed on her right side.

She had PT/OT as much as possible after the first few weeks. Once she opened her eyes, the PTs were able to move her out of the bed. By the first few days of April, she began to have some movement in her right leg. She continued to have PT/OT the entire time she was in the hospital.

Olania had to relearn everything, which was physically and emotionally jarring. The things we all do without even thinking, she had to concentrate and slowly maneuver – eating, brushing her teeth, washing her face, even smiling. She had to relearn her letters, numbers, what was up or down, left and right. Even though she knew the challenges she had, she never gave up. In fact, she began thinking about how to finish her bachelor’s degree in exercise science.

On April 15, Olania was transferred to Encompass Rehab in Newnan, Ga. She stayed there until May 13 and came home on her mother’s birthday – the best gift ever. Her work was far from done. She contacted the Department of Kinesiology and Health to find out how she could complete her last two courses before graduating. Amazingly, Olania not only continued her physical therapy, she also used this as a time to complete her internship and practicum.

In December 2020, this amazing young woman – who was not supposed to live, much less walk – received her diploma and graduated. She still has improvements to make and is waiting on a kidney transplant, but she continues to look forward to the future. She now plans to use her degree to work with those who have disabilities and to be that voice of encouragement and motivation for others.