The Origin of A Species 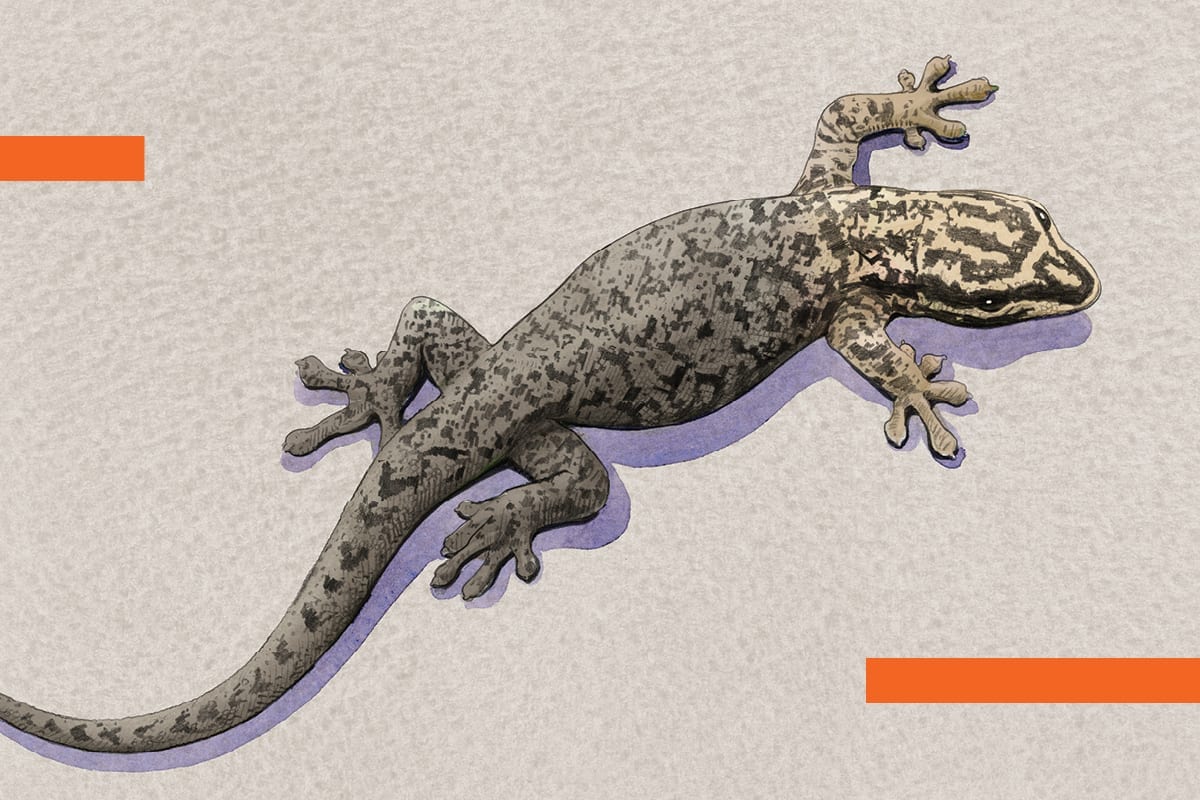 After the five-hour drive from Nairobi to Chogoria, Kenya, David Wojnowski sipped chai and awaited his lunch at a covered table outside a small restaurant at the base of Mount Kenya. He’d come to climb the peak the next day with his stepson Neil Woodruff, a professional mountain guide.

It was 2009, and Woodruff was there to scout mountain routes for clients, but foremost on Wojnowski’s agenda for the ascent was to track down two chameleons, Trioceros schubotzi, the Mount Kenya side-striped chameleon, and Kinyongia excubitor, the Mount Kenya hornless chameleon. The first is endemic to the mountain’s higher elevations, where it is quite cool, a rare climate for these lizards. The latter is found in the lower, warmer elevations.

Wojnowski, a clinical assistant professor in the College of Education and Human Development and longtime science educator, has been fascinated with reptiles and amphibians as long as he can remember. His first pet was a banded gecko. His father converted an old console television into a terrarium for it.

As the two dove into their lunch, Wojnowski noticed an unusual gecko crawling along a fencepost. At first glance, he figured it to be a Lygodactylus punctatus, the yellow-headed dwarf gecko, but something was different about this one.

“I thought, ‘Let me go catch this guy and see if it’s different,’” he remembers.

It was déjà vu for Wojnowski. Four years earlier and 600 miles south, he was sipping tea in the Kenyan village of Bungule at the base of Mount Kasigau when he spotted two small geckos skittering along a wood railing. He also caught those thinking he might have stumbled upon a yet undiscovered species of gecko. Compared to the yellow-headed dwarf gecko, as well as the geckos he’d found in Bungule, the Mount Kenya lizard’s head was slightly larger in proportion to its body, the pattern on its throat was different and the yellow coloration along its underside continued past the base of the tail.

“That was a big clue that this one was different,” he says.

Wojnowski brought the gecko back to the table to take a closer look.

“He named off two or three species, what they looked like, and how this gecko was close, but it was still different” Woodruff, his stepson, remembers. “And that was how the whole thing took off. That’s when the idea maybe started clicking that he had found something new. You could kind of watch the light turn on.”

After lunch, they left to meet their mountain guides, but Wojnowski couldn’t stop thinking about the gecko he just found. He set off to collect a few more. A few days after their climb, he brought the geckos to Patrick Malonza, head of the Herpetology Section at the National Museums of Kenya in Nairobi, on the hunch they were a new species. But Malonza had a backlog of other reptiles and amphibians to identify, including the gecko Wojnowski found in Bungule four years earlier, so it took him more than a year to get around to making an examination.

“So I’m kind of sitting on pins and needles for a year,” Wojnowski says.

For Wojnowski, it was an agonizing wait.

“One of my childhood dreams was to find a new species of reptile or amphibian,” he says.

And Wojnowski, convinced he’d found not one, but two new species of gecko, called in a scientific big gun. He showed photos of the gecko he found near Mount Kenya to Aaron Bauer, one of the world’s leading gecko taxonomists, and asked his opinion on whether he thought it was a new species.

(Text on graphic: Pattern Recognition – Lygodactylus wojnowskii has unusual black and white stripes on its head that almost form the shape of a Y. Its head is also slightly larger in proportion to its body than similar gecko species.)

“And he says, ‘Yeah, it looks different to me, too,’” Wojnowski says.

Wojnowski contacted Malonza to share Bauer’s stamp of approval. Impressed, Malonza sped up the process of evaluating Wojnowski’s geckos. After several extensive rounds of morphometrics, or measurement analysis, he agreed the geckos were different from what he’d seen before. But to confirm, they would need to do some DNA analysis — extensive, comparative DNA analysis. Wojnowski’s wait endured.

Wojnowski sought out Dean Williams, a colleague and biologist at Texas Christian University, who was already performing DNA analysis on other lizards. Wojnowski sent DNA samples but was told that it could potentially take several more years because of Williams’ workload.

Wojnowski teaches science methods to future science teachers and worked for the North Carolina Department of Environment and Natural Resources before starting his career in academia, so he’s fully aware of the meticulous review involved in making a scientific discovery such as this.

For the DNA analysis, Williams’ lab analyzed fragments of DNA based on their size. This determines if the DNA pattern is different compared to other similar species. Researchers also found physical differences between males and females. The female has a black pattern on its throat, while the male’s throat is solid black.

But the wait wasn’t over. Wojnowski’s Mount Kenya geckos wouldn’t be recognized as a new species until a manuscript of the discovery was published in a peer-reviewed journal and allowed to be scrutinized by the scientific community.

What Wojnowski did know is that his colleagues in the scientific community had picked out a name for his most recent gecko discovery: Lygodactylus wojnowskii.

Last December, Malonza, lead author of the scientific paper on Lygodactylus wojnowskii, broke the news: the manuscript had been accepted and would appear in the journal Zootaxa. It was finally official six years after Wojnowski discovered the new species.

Because Lygodactylus wojnowskii has more distinct genetic differences from other geckos in this genus, Malonza decided to report their findings about it first. The name of the additional new species that Wojnowski discovered near Bungule will be revealed this year when the scientific paper is published.

Animal and plant species are named through binomial nomenclature, a scientific system of classifying and naming living things according to their genus and species. Each animal or plant receives a name composed of two parts. The first part identifies the genus to which it belongs, and the second part names the species within the genus. The terms are usually Latin, although they can be based on words from other languages. Usually, the person who discovers the animal or plant has the privilege of giving the living organism a name.

To name the new gecko species Lygodactylus wojnowskii, scientists first determined it belonged to Lygodactylus, a genus of about 60 species of small geckos living mainly in Africa and Madagascar. When they confirmed it was different from other existing species in this genus, they created the species name by using Wojnowski’s last name and adding the letter “i” to Latinize the name, making it wojnowskii.

Wojnowski never set out to find a new species.

“It still gives me goosebumps to think about it,” he says.

After the scientific paper was published, Wojnowski shared with his students the story about discovering the gecko, the long road to determining it was a new species and having it named after him.

“I would say he was bouncing with joy,” says Christy Visaggi, a lecturer in the Department of Geosciences who, alongside Wojnowski, teaches an integrated science class on life and earth sciences for preservice early childhood education.

“He was so excited, and then being able to share that with future teachers was really meaningful.” Malonza notes that Wojnowski’s discoveries are significant because they have increased the number of lizard species found in Kenya, as well as lizards in this genus found in the east African country.

“It is also significant because it raises the conservation profile of central Kenya because of the increased number of species in the area,” he says.

Most people would have looked at the gecko on the fence post and assumed it was the same as all the others.

“New species will never be discovered if everyone thinks, ‘Oh, it’s just a lizard,’” says Wojnowski. “One thing I tell my students is noticing subtle differences when trying to identify animals is very important.”

These small differences are important for protecting diversity in biology. If people think a particular lizard is everywhere, they won’t notice if it starts to disappear, which could lead to the extinction of an entire species, Wojnowski says.

“If you find anything peculiar, especially a reptile or amphibian, take initiative and take a photo or specimen to the nearest museum or relevant institution for identification,” he says.

Wojnowski, now two for two when it comes to finding new species, hopes to find others someday.

“If I do retire, I plan on going to exotic places and looking for critters because I think that’s the most fun thing to do in the world,” he says.