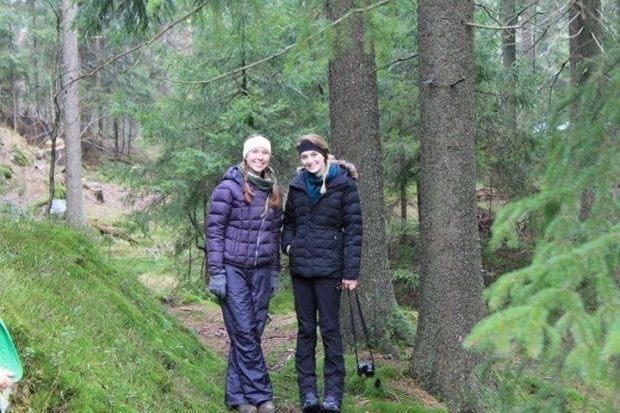 Traveling to Norway provided ample opportunity for discovery, observing, and learning. One of my favorite components of the trip as a whole was experiencing places and events that I have no prior experience with. These experiences broadened my horizon as an individual, a teacher, and a member of the Deaf community of Atlanta. While every experience was meaningful, the most remarkable in my opinion was touring different schools of Oslo, meeting a professor of Deaf education, and attending a debate about cochlear implantation of Norwegian children.

We visited a total of four kindergarten schools while in Oslo. Each of these were in different neighborhoods and served different groups of children. The first school was a middle school on the east side of Oslo. The classes we visited were both English classes in which the children were practicing how to introduce themselves.

While conversing with students, they shared their family background and history, which was fascinating to me because they came from all over the world. Most of the students spoke Norwegian, English, and at least if not two other languages at home! This caused me to pause and reflect on the similarities between students I have worked with.

The second school we attended school served every need of every child by incorporating water play, sensory play, physical play, outdoor play, outdoor living skills, emotional and social skills, and community living skills. I connected strongly with this school as it aligns with my personal teaching philosophy in that all needs of children are addressed in school. The third school we attended was an hour north of the city and was an outdoor kindergarten. The children spent a majority of their school day outside, regardless of the weather. The school philosophy centered around independence, respect for the earth in all its forms, and choice. I was awestruck by the amount of independence the students had and could not help compare it to the rigid and strict expectations students have throughout the day in the United States.

The expectation at this school was that as long as the children could see a teacher, they could explore and work as far away as they pleased. The rationale for this rule was to allow children the freedom to develop their own connection with nature but also to learn by trial and error independently. The teachers at this school were patient, respectful of students, masters of guiding questions and scaffolding, and trusting. These attributes and the type of safe and connected relationship these students and teachers developed has stayed with me and is a goal as I teach in classrooms in Atlanta.

The last school we attended was of special interest for me because it was a school for Deaf and hard of hearing (DHH) children. Given that my master’s degree is in Deaf education, I was particularly interested to see how the school navigated the communication needs of each student. All DHH children are drastically different from each other and each has their own unique communication needs.

The school and teachers took their role seriously and held each other to high communication expectations. These were that all students would have access to communication in their preferred mode at all times. While this is standard in the United States, the teachers at this school were particularly dedicated and asked us to participate in this expectation during our time there. I was excited and inspired to see such dedicated teachers working with DHH children and sharing a common goal with myself to advocate for and teach DHH children to thrive throughout their lives.

In addition to elementary and middle schools, I had an opportunity to converse with a professor of Deaf education at the collegiate level. This conversation led to an invitation to a debate about cochlear implantation.

The conversation with Arnfinn, who insisted I called him by his first name, consisted mostly of comparing Deaf education between the United States and Norway. I expected the differences to be many and drastic, however the two countries were mostly congruent.

A stark difference between the two countries was how Norway views DHH people and their language needs. Contrary to the United States, Norwegian Sign Language is considered another language that is equally as respected and valued. Instead of being seen as people with a disability, generally DHH people in Norway are viewed as people with varied communication needs. This was absolutely shocking and encouraging to me and the inspiration I felt after learning this is still with me today.

Following this comparison, Arnfinn and I, along with another student, attended a debate about cochlear implantation. The debate about whether to implant DHH children is tense and emotional it was, sadly, no surprise that it is the same in Norway. There were people in attendance that were passionately for and against implantation and to be a part of the discussion, even if just an observer, was important for me.

The realization that DHH people and educators of the DHH have similar struggles as we do in the United States made me feel connected and supported as an educator on a global scale. We as teachers can work together across language barriers, continents, and varying viewpoints to better serve all DHH children.

The myriad of experiences I had while in Norway pushed me outside of my comfort zone by challenging my educational beliefs, requiring me to function in a different language than my own, and exposing me to new ways of life and education. None of this personal and professional development could not have happened without my study abroad experience in Norway.

Melissa is a graduate from the Department of Early Childhood and Elementary Education.