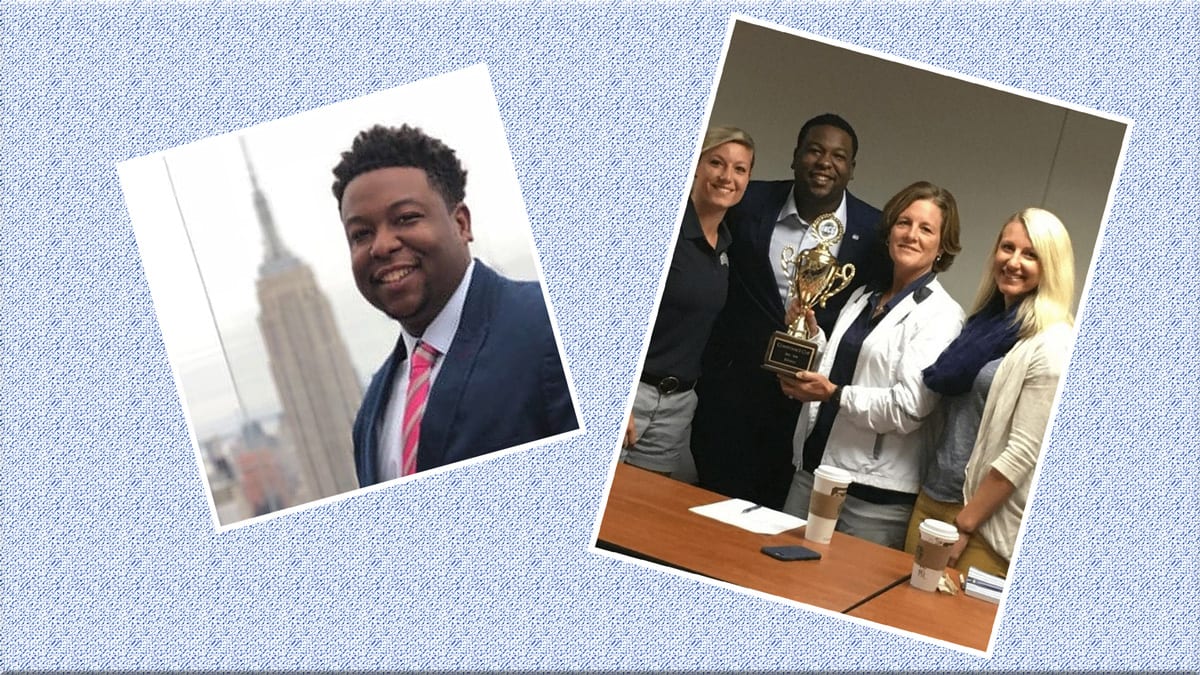 By Olivia Hudson-Logan (M.S., May 2017) — Born and raised ten minutes outside of New York City, Michael Sainte (M.S., sport administration ’12) landed a dream job working as the Director of Compliance and Membership Services with the BIG EAST Conference in New York. To get to this job, he used the graduate program as an entry point into the sport business industry.

As a child, Sainte participated in a wide variety of sports. He quickly recognized his love for athletics and shifted his focus to baseball. His mother’s encouragement to strive for greatness motivated him to pursue a college degree.

Sainte received his bachelor’s degree in physical education with a concentration in sports management from Johnson C. Smith University in Charlotte, North Carolina. After realizing he wanted to pursue a career outside of teaching, he switched gears and explored new avenues to achieve his goals of working in college athletics.

“I enjoyed helping younger people and I felt that college was the perfect place for me to have an impact on that, especially people of color. I felt that athletics gave me the ability to tap into that population.”

In spring 2011, the self-driven Sainte continued his path to success by starting in the sport administration graduate program at Georgia State University. Sainte believes that Atlanta is the perfect location for sports because it gives people the opportunity to experience a little bit of everything. Georgia State gave him the opportunity to use this time outside the classroom to branch out and discover his true passion for athletics. Entering his final year of graduate school, he took a full-time position in compliance in Georgia State’s athletics department and multitasking was somewhat challenging, but became second nature.

After three years in a full-time role, Sainte left Atlanta to become the director of compliance at UNCG. Sainte created opportunities for athletes to excel in athletics and in the classroom. He understood the significance he had on students and taught them the ability to build a professional relationship.

“It feels great to work at a job where you matter,” Sainte reflects.

He often tells his students to be who they are and don’t worry about the mistakes along the way. He also taught classes as an adjunct instructor.

For the BIG EAST, Sainte serves as the primary contractor, managing waivers, assisting and interpreting action plans, requesting mission proposals, among other duties. He also handles membership services, where he creates and oversees day-to-day student-athlete programming.

His future in the industry

His advice to young professionals interested in the sport industry is simple.

“Work for free! Valuable experience is important, and when you start to ask for money you don’t get the most out of it. Offering your help speaks a lot about your character, and shows that this is something you really want to do in the future,” Sainte states.

Many Panthers look to follow his lead into the industry.

Who is your favorite athlete and why?

LeBron James. He has just evolved as an athlete and has become a big influence. What he does outside of athletics is great, and a lot of the programs he creates go unnoticed. He speaks his mind, and to have that ability is a great place to be and I think he’s there now.

If you could have dinner with one legendary athlete who would it be and why?

I’d definitely have to say, Muhammad Ali! I think that dude was a trendsetter. I think he changed the whole game and the role of an athlete in today’s society. Just to get an idea of what went through his mind prior to making these public statements.”

If you could have one superpower what would it be and why?

To fly. I love to travel. I think that would be great instead of paying for airline tickets.

Start your sport administration career with us!